That bread with the Caesar salad you see below is topped with Chef Elaine's homemade garlic butter, a combination of butter, garlic, Parmesan cheese, garlic, salt, Italian seasoning, black pepper, and paprika.  You might want to start by adding only one-half or maybe one-third of the garlic and add more until you get the bang you desire.  This one would scare off a vampire.
https://www.allrecipes.com/recipe/36925/garlic-butter 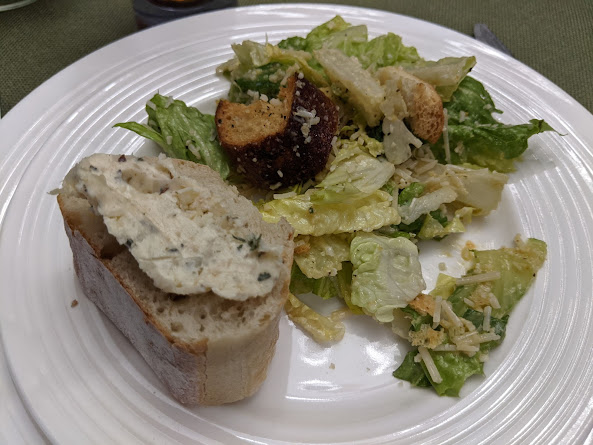 Posted by Paul Moorman at 10:07 AM No comments:

I needed a pair of wired, in-ear headphones but won't use them often enough to justify one of the more expensive brands.  A search for "best 3.5mm earbuds" led me to the article from Lifewire (first link below) where their Best Budget recommendation was "1MORE Piston Fit at Amazon" (second link).  I snagged a pair for only $12.99 plus tax.
https://www.lifewire.com/best-wired-earbuds-4767562
https://www.amazon.com/dp/B01KPYI0YS 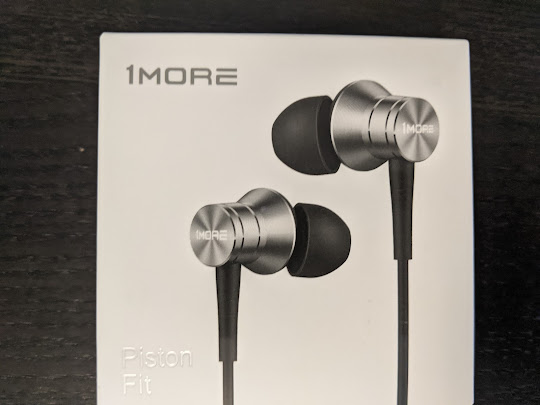 Posted by Paul Moorman at 9:23 AM No comments:

In a few years, these six new arborvitaes will provide an even nicer visual screen from our neighbor's yards which became an issue when about a dozen of their dead trees had to be removed.  Gorman Landscaping did a great job removing the sod and a few good-sized roots, digging the holes, evenly spacing the trees, and mulching the entire area.  Arborvitae need a lot of water which we'll do using the "drip" setting on our hose's nozzle, fifteen minutes at a time per tree.
https://www.gormanlandscape.com 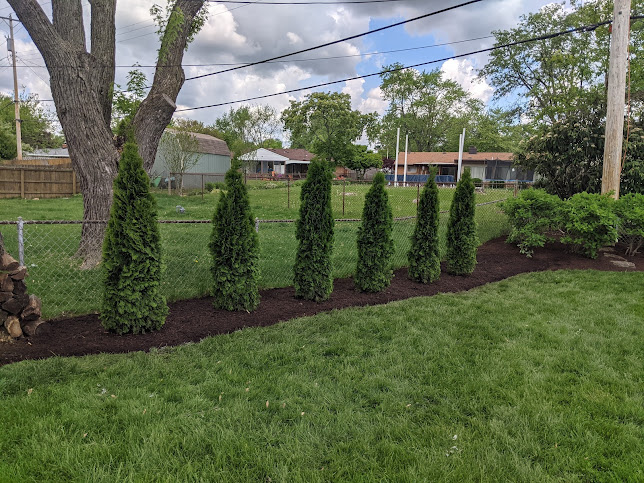 Posted by Paul Moorman at 9:57 AM No comments:

This little plant started as a bottom couple of inches of a store-bought head of romaine lettuce.  Gardner Elaine planted it in our raised herb bed (sorry bunnies) bottoms up, watering it daily, and in a week, these tiny leaves appeared.  Instead of it ending up in the trash, we're hoping for a tasty end-of-summer Caeser salad.
Big shout out to Kim for this garden suggestion! 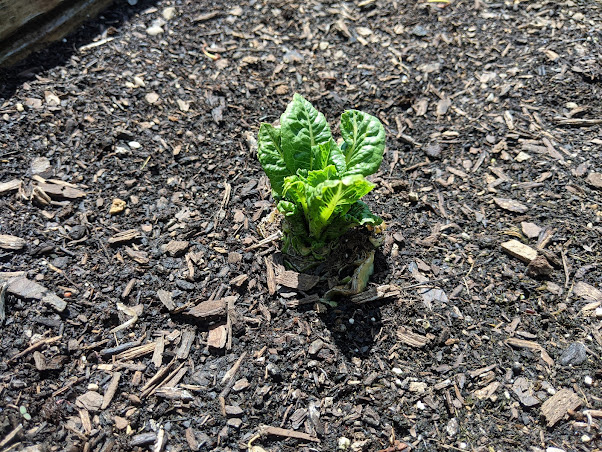 Posted by Paul Moorman at 10:23 AM No comments:

We were fortunate to get this 3-piece set for our deck back in March before the price of outdoor furniture went through the roof.  It was one of those random deals you find at Costco that you jump on while supplies last.  It was a bit of a splurge, but we had just received our yearly Costco Cash Rewards certificate, which paid for a good chunk of it.

It came in a 5'x4'x3' box and fortunately, my son has a truck with a lift gate.  Mike, thanks for the assist! 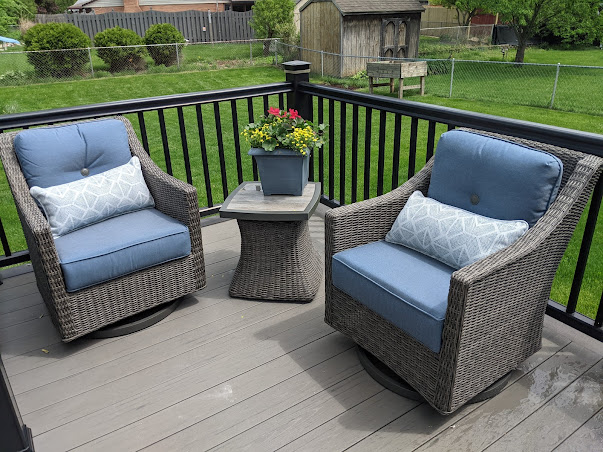 Posted by Paul Moorman at 9:49 AM No comments:

The basket of complimentary (I love free) homemade potato chips comes from The Tavern at The Holly Inn, located in the heart of Pinehurst, NC.  We made the hour-plus trip south from Chapel Hill just to have lunch and stroll through their small downtown.  But back to the chips.  They are addictive!  Chef Elaine and I are not big chip eaters but we simply could not stop going back for one handful after another.  They're the perfect combination of hot, salty, and oily.  Add to that an outside table on a beautiful day, and Bloody Mary's of course, and it was delightful.
https://www.pinehurst.com/dining/the-tavern 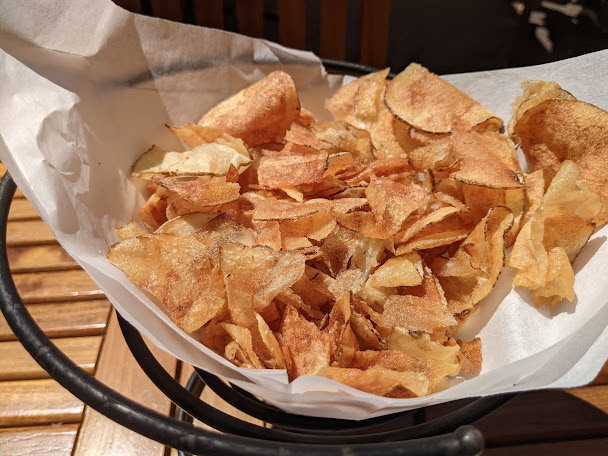 Posted by Paul Moorman at 12:14 PM No comments:

The cute soft pretzel shown below comes from Frenchy's Rockaway Grill in Clearwater Beach, FL, and is shaped like their fishbone logo, with cheese sauce and honey mustard on the side.  That was a little something for the stomach while sipping on their famous Frozen Rum Runner, which combines Don Q Pasión Rum, Dark and 151 rums, banana liqueur, blackberry brandy, and tropical fruit juices.  A couple of those and it's rum-dee-dumb-dumb!
For a view of their white sandy beach, check out the live video stream at the link below.
https://frenchysonline.com/clearwater-beach-cam 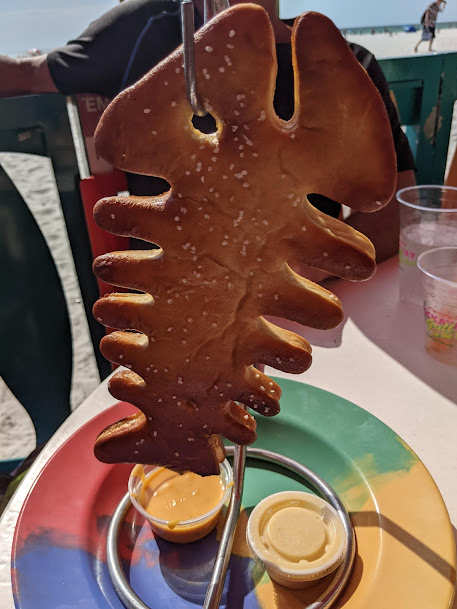 Posted by Paul Moorman at 12:46 PM No comments:

Our new E-ZPass instructed us to store the transponder in the package it arrived in when not in use to help prevent electronic snooping.  Of course, I had already torn open the bag and it was pretty much useless at that point.  So I hopped over to Amazon for a solution and found a pair of Faraday Bags for $12.  Each has two pouches with the one in the back being the signal blocker.  You can also store your car's key fob, contactless credit cards, and smartphones to protect them.
https://www.amazon.com/dp/B07PS4D87N 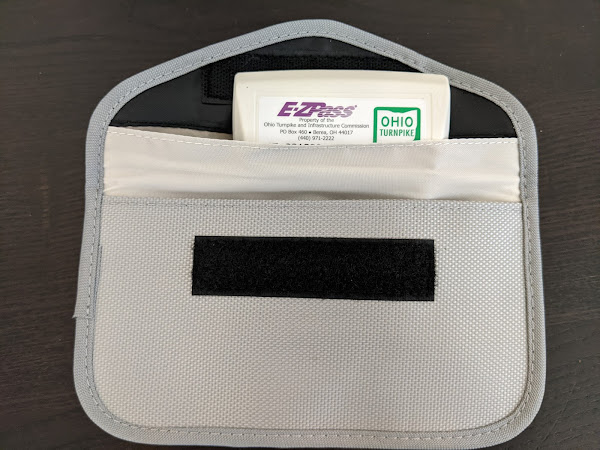 Posted by Paul Moorman at 10:30 AM No comments:

My Jeep spends its life parked outside, a victim of having a single-car garage.  It's not a big deal, and having had a remote starter added a few years ago, makes for a warm seat in the winter.  I occasionally whine about it and I would really like to have a two-car garage someday like I've had a couple times in the past.
But out of the blue, I realized I should stop my whining.
I grew up in a small home in North Dayton and it also had a one-car garage, the one shown below.  For as far back as I can remember, our family had two cars.  My Mom drove a big yellow Chevy station wagon and my Dad had a Corvair and then an Impala.  The station wagon was always parked in the garage and the Corvair/Impala was either in the driveway or on the street.
Not once did I ever hear my Dad whine about it.  As far as I know, he never had his car in the garage, at least until after Mom passed away.  Thirty years without a word.  A real man.
Time to put on my big boy pants and shut my mouth. 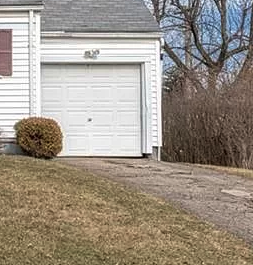 Posted by Paul Moorman at 9:32 AM No comments:

The picture below comes from a sidewalk in Clearwater Beach, Florida.  It was one of many spotted while out for a walk.  Can you guess its purpose?
I couldn't figure it out but my brother-in-law (Thanks, Al) had the answer pretty quickly.  The patch was used to cover old parking meter post stubs which had been cut down and replaced with electronic pay stations.  I suppose that's one more job, Parking Meter Collector, that's being displaced little by little with technology. 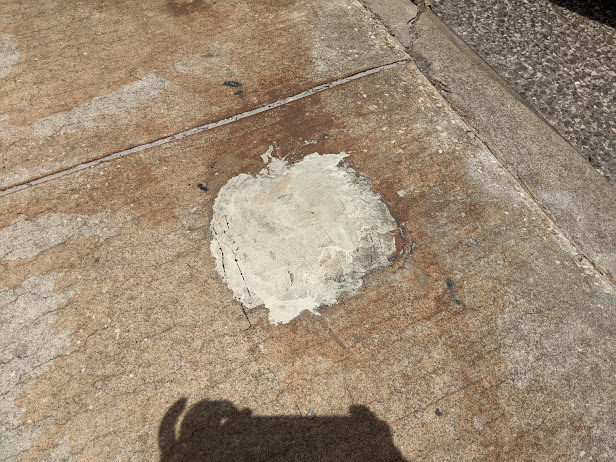 Posted by Paul Moorman at 1:09 PM No comments: