Being a Star Trek fan since I was a little boy, I practiced and practiced until I could perform Spock's Vulcan salute flawlessly with either hand.  But until recently I never knew, or really ever thought about, its origin.  Leonard Nimoy based the gesture on a Jewish Kohanim Priestly Blessing and it represents the Hebrew letter Shin (ש).  This became so well-known that an emoji was added (shown below) back in 2014 to the Unicode 7 standard. 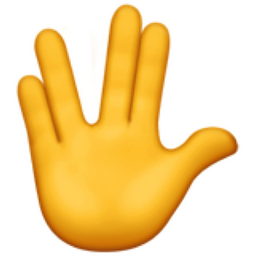